"We must continue to find a peaceful solution" 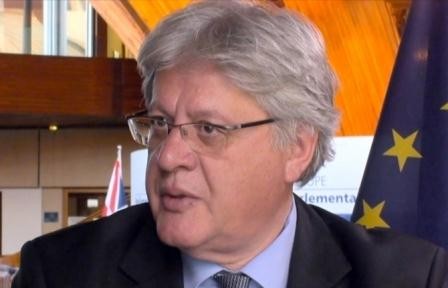 Efforts should be continued towards the liberation of the occupied Nagorno-Karabakh region and other territories of Azerbaijan, PACE Monitoring Committee’s co-rapporteur for Azerbaijan, Stefan Schennach, told local media.

“We must continue making efforts to find a peaceful solution to the Armenian-Azerbaijani conflict,” the co-rapporteur said, calling the restoration of the ceasefire between the two countries a very positive step.


“My visit to Azerbaijan took place while the escalation in Nagorno-Karabakh was ongoing. I’m deeply concerned by the emergence of this situation, which I regret,” he noted. “And I have to say that I was shocked by young Azerbaijani boys and girls taking to the streets of Baku, rejecting the ceasefire and calling for war. There is no future for war and for this matter there is no military solution.”


The co-rapporteur also spoke of the Subcommittee on conflicts between the countries of the Council of Europe.


Schennach recalled that the meeting on Nagorno-Karabakh took place in PACE on April 21.


“Besides, we invited the co-rappouerters for both countries for the first time. Two representatives from conflicting countries, including Turkey and Cyprus, attended the meeting. We mulled the prospects of settlement of these conflicts. We didn’t touch upon the activity of international mediatory bodies such as the Geneva Group and the Minsk Group. We only discussed what the Council of Europe can do for the settlement of the conflicts. The OSCE Minsk Group is specialized in the conflict’s settlement. The Subcommittee is working with the conflicting parties within the Council of Europe. Sometimes I observe hate speech and statements. The format of dialogue between the two countries makes us a little closer to resolving the conflict. The Council of Europe is not a scene for performances of the members. We wish to work together,” he said.