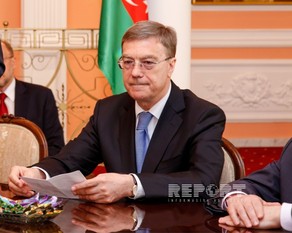 "We stand for a peaceful settlement of the conflict based on the norms of international law and in the interest of all the people who live in this region." Russian ambassador to Azerbaijan Vladimir Dorokhin stated to journalists, commenting on the Nagorno-Karabakh conflict.

According to him, Russia's position on this issue voiced repeatedly: " It was voiced by Foreign Minister and the President's press secretary."