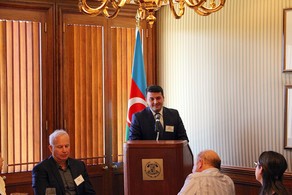 A paper of Azerbaijan's Consul General in Los Angeles, Nasimi Aghayev updating falsification attempts of Armenia, was published in the US media.

Daily Caller dated May 19, 2016 publishes article of the Azerbaijani diplomat entitled: "The Armenia-Azerbaijan conflict: The unfortunate role of propaganda".

'Together with his Russian and French colleagues, the U.S. Secretary of State John Kerry met on May 16 with Presidents of Azerbaijan and Armenia in Vienna. It was the first meeting of both presidents since the April escalation of armed confrontations in Azerbaijan’s Karabakh region that resulted in tragic military and civilian deaths, bringing global attention to this protracted conflict.

The next talks are planned for June with a stated aim to “resume negotiations on a comprehensive settlement.” However a comprehensive settlement can hardly be achieved if the conflict basics are misrepresented, misunderstood or simply ignored. As is sadly true of many wars, there are special interests supporting the instigators of this particular war. Far from the frontlines and the gunfire, these interests effectuate advocacy campaigns of misconception and disinformation - working tirelessly to control global narratives and limit reactions to the truth. Lost in the noise are an illegal military occupation and ethnic cleansing implemented by Armenia against Azerbaijan, the paper says.

'One of the more troubling and unfortunately effective narratives is based on the religious identity of the two nations. The propagandists purposefully present it as a conflict “between Christian Armenia and Muslim Azerbaijan.” Despite Azerbaijan’s longstanding identity as a champion of multi-faith harmony, we don’t live in a world where the specifics always matter. A lack of public knowledge and the triggering impact of fear and otherwise straightforward Islamophobia have allowed this message to effectively perpetuate brutal violence against Azerbaijan - a longstanding ally to the U.S. and the State of Israel; a safe and welcoming home to Christian and Jewish communities for centuries', Nasimi Aghayev says.

'Azerbaijan is a secular republic, globally celebrated as a successful model for multi-faith and multicultural engagement. It is also an international champion, alongside the U.S. and other allies, in the fight against terrorism and extremism. Over 30,000 Armenian Christians live peacefully in Baku, Azerbaijan’s capital, which boasts a grand Armenian Church - completely renovated and perfectly preserved by the Azerbaijani Government. Nationwide, around 500,000 Christians of various denominations and 30,000 Jews live peacefully alongside a majority Muslim population', the paper ends.