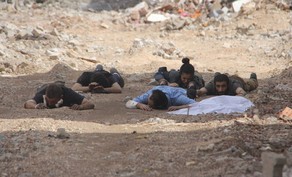 A total of 72 militants of the outlawed Kurdistan Workers’ Party (PKK) surrendered to Turkish security forces on May 27 as clashes intensified in two neighborhoods of the southeastern district of Nusaybin despite a statement from the group announcing a redeployment outside the district.

Some 42 PKK militants, including 10 women and 32 men, reportedly surrendered to the authorities on May 26 as operations intensified in Nusaybin’s Fırat and Yenişehir neighborhoods.

The wounded militants were brought to Nusaybin State Hospital for treatment.

The surrender on May 26 was the highest number of PKK militants to yield to security forces in the district, just a day after 25 militants surrendered on May 24.