Police station​ in Yerevan being captured 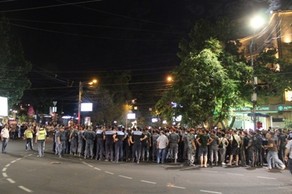 It's a third day today since the group of armed persons captured the police station in Yerevan's Erebuni district, Armenia.

According to the News.am, the armed group has been holding 4 people hostage. The remaining hostages were earlier released in the afternoon.

In addition, on the eve, about 100 activists came from the Liberty Square to the Khorenatsi street, where the captured police station is located in order to express support for the armed group that seized the PPS and demandingrelease of opposition leader Zhirayr Sefilyan and the resignation of President of Armenia. Protesters chanted "Free, independent Armenia".