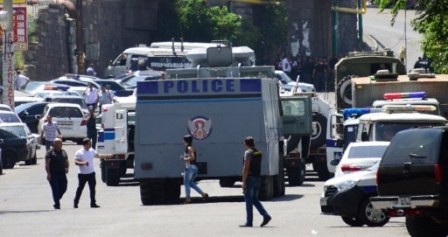 Armenian police released names of members of the armed group that seized policebuilding in Yerevan.

The Armenian media reports,names of 30 people were published.

Another, 31st member of group Tamrazyan Tatul, who was wounded, is currently in hospital.

On the morning of July 17, a group of armed men calling themselves "Sasna tsrer" (Daredevils of Sasun), seized the building of the police station in Erebuni district on the outskirts of Yerevan, demanding the release of detained opposition leader contained Zhirayr Sefilyan, who accused of illegal purchase and possession of weapons. The group seized the building, and captured Deputy Chief of Police of Armenia Major General Vardan Yeghiazaryan and Deputy Chief of Police of Yerevan Colonel Valery Osipyan who arrived there for talks.On July 23 members of the armed group released all hostages in exchange for the opening of press centre, and still continue to be in a captured building.