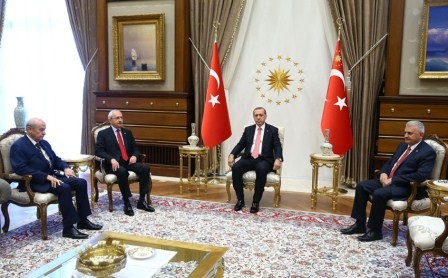 A July 25 meeting initiated by Turkish President Erdoğan with Prime Minister Binali Yıldırım and two opposition leaders has started at the Presidential Palace in Ankara, with the recent failed military coup attempt and measures taken against coup plotters on the agenda, Hurriyet reported.

Sources from the office of the president informed that Erdoğan will thank the three party leaders for their united stance against the coup attempt and listen to their views on the ongoing fight against the Fethullah Gülen organization within the state.

Erdoğan’s invitation to Kılıçdaroğlu will be important in mending the relationship between the two, as they have engaged in harsh quarrels over the last two years. Kılıçdaroğlu had refused to go to the recently built presidential palace since Erdoğan moved to the massive presidential compound. The July 25 meeting will be a first for Kılıçdaroğlu.