Payment of 20 mln USD compensation will be dicsussed 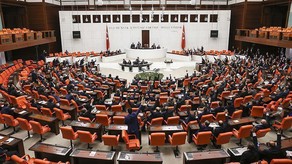 The agreement on normalization of Turkey-Israel relations has been included in the Parliament's (TBMM) agenda for ratification.

According to the agreement, Israel will pay 20 million USD compensation to Turkey within 25 days.

Israeli servicemen will be released from civil and criminal liability in the agreement. Also, Israel will soften the embargo on humanitarian aid to Palestine.

Notably, Turkish FM Mevlüt Çavuşoğlu have stated that the draft document submitted to the Chairman of the Parliament and the agreement will be discussed in the parliament. On June 29 this year, the Israeli government approved the agreement on normalization of relations with Turkey. Israel apologized to Turkey in regard with the incident.

Relations between the two states broke off on May 31, 2010 as Israeli soldiers had attacked Turkey's Mavi Marmara ship, which was carrying humanitarian aid to the Palestinian Gaza Strip. 9 Turkish citizens were killed during the incident.