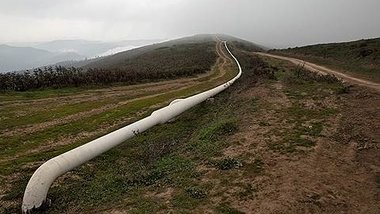 Georgia’s State Security Service (SSS) have prevented a terrorist attack. Seven suspects are detained, including the head of Poti city police, Levan Mamporia. The detainees are suspected in links with a terrorist organisation.

According to a SSS representative, they were going to bomb gas pipeline that connects Russia and Armenia in Saguramo. In addition to Levan Mamporia, detained for abuse of power and Irakli B., detained for covering up criminal information, five people are detained in connection with preparation of a terrorist attack: Beka B., Vladimir R., Midia V., Jaba M. and Nuri Ch.

On August 20, members of the group went to a forested up to Zhinvali-Shatili road to take explosives and weaponry. There they took 4 units of 200 gr. TNT, 2 types of match cord, 5 units of capsule detonators and other explosives. At that moment they were detained. Machine guns and ammo was also found on the place. At home of one of the suspects a computer was found with a map on which places of planned explosions were marked.

An investigation is being held by the SSS’s counterintelligence Department.