More than 20 killed in series of explosions 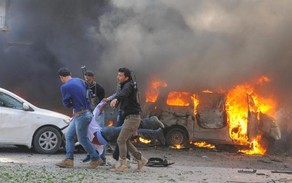 Series of explosions occurred in large cities of Syria, as a result of terrorist attacks more than 20 people killed, at least 50 injured. Two explosions occurred on the highway near the bridge Arzuna in Tartus region, west of Syria. According to AFP, the first bomb exploded in the car. Then, when the people gathered to help the wounded in the first blast, another suicide bombing attack took place.

State media say that the goal of the attackers were government and military installations.