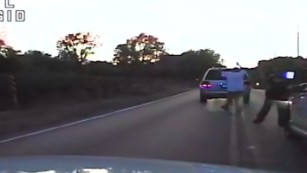 Protests erupted in North Carolina following the fatal shooting of a man by a police officer at an apartment complex in Charlotte.

Demonstrators gathered near the complex Tuesday night, carrying signs that said "Black Lives Matter" and chanting "no justice, no peace."

Brentley Vinson, the officer involved in the shooting, has been placed on paid administrative leave, according to the mayor.

The mayor called for a full investigation into the shooting, saying she'll work with authorities on the case.
"We are reaching out to community to ask for calm," the mayor tweeted.

"The community deserves answers and full investigation will ensue. Will be reaching out to community leaders to work together."

The incident started when Charlotte police looking to serve a warrant Tuesday shot and killed a man in the parking lot of an apartment complex.

Though the man was armed, he's not the one police were looking for, the Charlotte-Mecklenburg Police Department said in a statement.

The Tuesday afternoon shooting set off an angry crowd response that grew as the hours passed.

It was not clear why authorities were serving the warrant. While they were looking for that individual, officers saw a man get out of a car with a gun, then get back into the vehicle, the statement said.

"The subject got back out of the vehicle armed with a firearm and posed an imminent deadly threat to the officers who subsequently fired their weapon striking the subject," police said.

Police Chief Kerr Putney said at least one officer shot the man. Two investigative branches of the department were looking into the shooting, he said

Scott died at Carolinas Medical Center. A gun he was holding was found at the scene, police said.

Protesters blocked off a road as a line of police in riot gear stretched across the street.

At least 12 officers suffered injuries during the protests, the police department tweeted. It did not provide details on the nature and severity of the injuries, but said one of its officers was hit in the face with a rock.
The officer involved in the shooting has worked for the department since July 21, 2014.