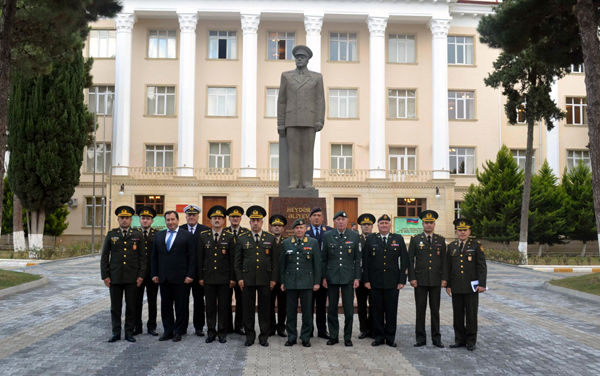 Within the "NATO Days" conducted by a group of experts of NATO Allied Command Transformation, delegation led by Major General Odd Egil Pedersen visited the Department of International Military Cooperation of the Ministry of Defence.

During the meeting, the delegation was informed about Azerbaijan-NATO military cooperation, use of NATO Operational Capabilities Concept (OCC) in the Armed Forces of Azerbaijan and Azerbaijan's contribution to peacekeeping operations of NATO. Sides also discussed prospects of cooperation with NATO.

NATO delegation was also informed about the regional security issues during the meeting.

Delegation led by Major-General Odd Egil Pedersen met with commanding staff of the school. Delegation was presented an overview briefing on the history of the military school, teaching and educational process and other school activities.

Delegation got acquainted with teaching guide, material and technical means as well as military equipment in the departments of military school.

The guests were thoroughly informed about the military equipment, training simulators, small arms and other military means in the faculties of school.