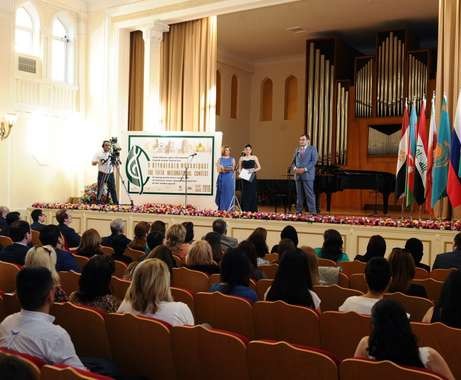 Baku Music Academy hosted the awarding ceremony of the Fifth International Festival-Competition of young performers (under 20) among the countries of the Islamic World.

The contest aims to uncover new talents, exchange international experience and ideas, portray the Azerbaijani culture and arts for teenagers and youth from all over the world, and intensify dialogue between performers from the East and the West.

The festival, which is considered the project of “Kainat” Youth Center, is organized with the support of the Islamic Educational, Scientific and Cultural Organization (ISESCO), the Ministry of Youth and Sports of the Republic of Azerbaijan, with participation of the Ministry of Foreign Affairs of Azerbaijan,the Ministry of Culture and Tourism as well as Baku Music Academy.

In his speech, Deputy Youth and Sports Minister of Azerbaijan Intiqam Babayev stressed that the festival has become a traditional event which is being held for the fifth time.

The first International Festival-Contest of young Islamic classic music performers was held in Baku on April 27-28, 2012 and joined by representatives from 28 countries, including Turkey, Egypt, Morocco, Kuwait, Kazakhstan, Uzbekistan, and the Russian republic of Tatarstan.

Addressing the event Intiqam Babayev spoke about recent cultural achievements of the country and stressed the role of government in making Azerbaijan the venue for major international cultural events – festivals, competitions, forums etc. He emphasized the role of Heydar Aliyev Foundation and its president Mehriban Aliyeva in promotion of Azerbaijani culture abroad.

"This project once again has shown that the music of the Islamic countries roots to ancient cultural traditions and has talented followers," said Babayev.

The main prize of the festival (Grand Prix) was presented to Azerbaijani pianist Muhammad Ali Pasha-zadeh.

The winners of the 1st, 2nd and 3rd places were awarded diplomas and gifts.

The event ended with a concert program of winners of the Fourth International Festival-Competition.