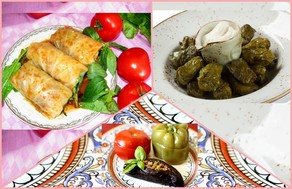 Baku will play host to the international dolma festival.

It was told at the Azerbaijan National Culinary Center.

The center said that dolma festival is planned to be held in July. Preparations for the festival are underway.

Besides the Turkic-speaking countries, guests from around the world will take part in the international festival.

Dolma is a family of stuffed vegetable dishes common in Azerbaijan, Turkey, Iran and surrounding regions including the Balkans, the Caucasus, Russia and Central Asia. Common vegetables to stuff include tomato, pepper, onion, zucchini, eggplant, and garlic. The stuffing may or may not include meat.