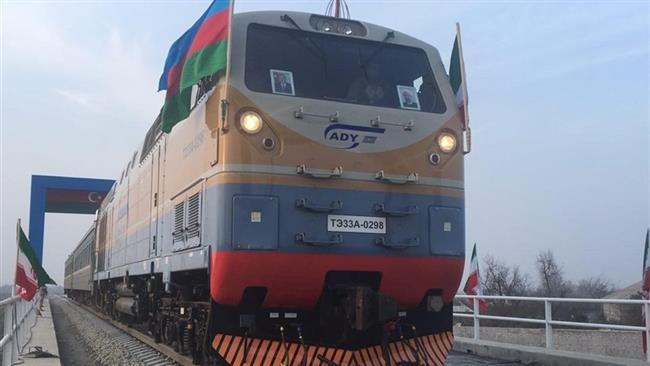 Azerbaijan officially launched a rail link with Iran on Sunday by sending a train across the border to Iran’s northern city of Astara thus taking an ambitious multimodal transport project that connects northern Europe to India closer to reality.

Axar.az reports that, the train arrived in Iran simultaneous with a visit to the Islamic Republic by Azerbaijan’s President Ilham Aliyev where he discussed the implementation of the North-South Transport Corridor (NSTC) with Iran’s President Hassan Rouhani.

Aliyev told reporters after meeting Rouhani that the NSTC was an important project, stressing that it could have positive effects on the economies of its host countries.

He indicated Baku’s determination to materialize the project when he said his country would invest in the construction of a railway from Iran’s northern city of Rasht to Astara.

Aliyev emphasized that a basic agreement that was signed between the main railway companies of Iran and Azerbaijan during his Sunday meeting with Rouhani was in the same connection and could help facilitate the expansion of economic relations between the two countries.

The NSTC is a multi-modal route to link India and the Middle East to the Caucasus, Central Asia and Europe.

The ship, road and rail route connects India’s Mumbai to the Iranian port of Bandar Abbas and further to Baku in Azerbaijan as well as Astrakhan, Moscow and St Petersburg in Russia before stretching to northern Europe and Scandinavia.

In addition to Iran, India and Russia, countries that are on board to integrate into the transit network include Armenia, Azerbaijan, Belarus, Kyrgyzstan, Kazakhstan, Ukraine, Turkey, Tajikistan, Oman, Syria and Bulgaria.