Main Cargo met with Director General of the Baku port 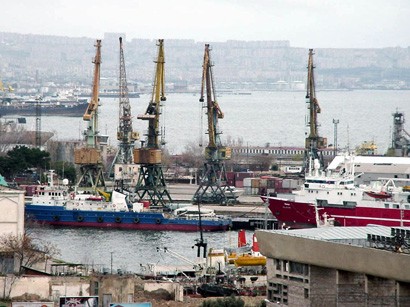 Official delegation led by Kazakh First Deputy Prime Minister Bakytzhan Sagintayev visited Baku, Azerbaijan Feb. 16, 2016 with an aim to get acquainted with the Baku International Sea Trade Port’s experience in its operations, the message of the Baku port said Feb. 16.

As part of the visit, the delegation toured the new port of Baku which is being constructed at the Alat settlement and Main Cargo Terminal in downtown Baku, according to the message.

Director General of the Baku port Taleh Ziyadov familiarized the delegation led by Sagintayev with port’s operations and the parties exchanged views on ways to accelerate cargo shipment between Azerbaijan and Kazakhstan.

In accordance with the established partnership, the sides mentioned continuous information and experience exchange between the port of Baku and the port of Aktau. Both parties discussed results of such processes and noted future partnership in this direction.

In accordance with instructions of Azerbaijani President Ilham Aliyev, the port of Baku took a number of steps to create favorable conditions for trucks moving from Turkey to Central Asia and to simplify procedures for transit cargo that goes through the territory of the country. As a result, after the introduction of the new system, the time spent on cargo handling decreased from two days to three hours.

The guests were informed about important work implemented at the Baku port in recent years with an aim to create transparent environment, apply innovative systems and carry out operations in accordance with the international standards, as well as about its future plans and perspectives.

The director general of the Baku port also talked about the importance of a free trade zone, which is planned to be established around the port’s territory and its role in diversification of Azerbaijan economy’s non-oil sector.
Sagintayev suggested learning from the Baku International Sea Trade Port’s experience in handling cargo that goes to Central Asia to eliminate delays in the port of Aktau.