All farms damaged by Armenia's shelling will be restored 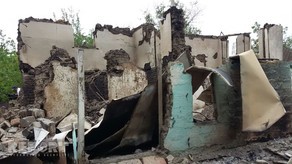 "Qara inək" ("Black cow") farm, shelled by Armenians using heavy artillery, will be restored by the state. Damages caused to the entrepreneurs will be paid".

Local media was told by Shirzad Abdullayev, Executive Director of National Entrepreneurship Support Fund of the Ministry of Economics.

Sh. Abdullayev said that expansion of farms and construction of a new milk processing plant under a farm is planned: "Not only "Qara inək" farm, but also farms, located on the frontline territories and damaged as a result of Armenian vandalism will be restored by the state. Entrepreneurs will be granted loans again to be able to restore their farms".

As a result of ceasefire violation the farming in the Afatli village seriously damaged.

11 horned animals were killed and 19 wounded.

According to the information, "Qara inək fermer təsərrüfatı" company was established by the soft loan allocated by the National Entrepreneurship Support Fund under the Ministry of Economy and Industry.

The animals were brought from Germany and other countries.