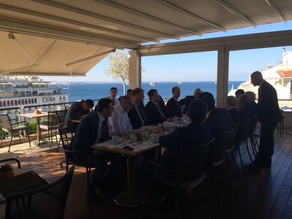 Vice-President of the European Commission for Energy Maroš Šefčovič has met with representatives of the Azerbaijani delegation, which arrived in the Greek Thessaloniki to attend the groundbreaking ceremony of the Trans Adriatic Pipeline (TAP).

The representative of the European Commission posted in his microblog on Twitter.