New vessel to be brought to Azerbaijan 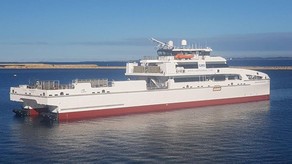 A ship of 70-foot catamaran type, which was built by the order of the "Caspian Marine Services'' (CMS) in western Australia, was launched.

The catamaran named Rashid Behbudov has been launched by company Austal Limited.

Local media reports referring to the Caspian Marine Services, contract for the construction of the vessel was signed in June 2015. Construction started in October 2015 in parallel to the two shipyards. The front of the hull is made in the Balamban shipyard (Philippines), and the aft part of the hull built in Australia.

Notably, the vessel was designed by the company Incat Crowther. Delivery in Baku is scheduled in November 2016.