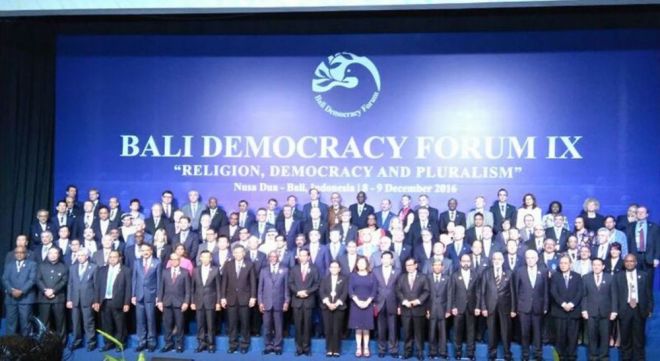 Azerbaijan`s achievements were highlighted at the Bali Democracy Forum.

Axar.az informs, quoting the Azertac, Azerbaijan`s Ambassador to Indonesia Tamerlan Garayev delivered a speech at the Forum, as he provided an insight into the history of the country`s independence. On multicultural values the diplomat said Azerbaijan demonstrates a model of tolerance in this sense. Mr. Garayev highlighted living in peace and stability of representatives of various confessions in the country, adding various peoples of the region have historically enjoyed good-neighborliness, friendship and cooperation based on the robust tolerance traditions, mutual respect and trust.

On the Armenia-Azerbaijan Nagorno-Karabakh conflict, he said 20 per cent of Azerbaijan`s territories were occupied by the aggressor country.

The Bali Democracy Forum (BDF) initiated by Indonesia in 2008, is an annual, inclusive and open intergovernmental forum on the development of democracy in the Asia Pacific region. The forum is aimed to promote and foster regional and international cooperation in the field of peace and democracy through dialogue-based on sharing experiences and best practices that adhere to the principle of equality, mutual respect and understanding, with the participating countries sharing its ownership.