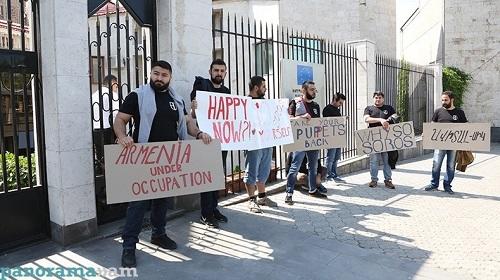 Changes that have begun in Armenia a year ago continue. On May 19, prime minister Nikol Pashinyan appealed to the citizens and urged them to block entrance and exit of all court buildings. He also emphasized that they would make a revolution in the field of justice. The Prime Minister is expected to address the court system at noon.

Axar.az reports that hence, protesters blocked court buildings in the country on May 20 under the slogan "On behalf of the fair court!" and closed the entrance and exit. The protesters also blocked the building of the Armenian Constitutional Court.

A group of people headed by chief of the State Control Service, David Sanasaryan, whose authority was suspended due to abuse of office also gathered in front of the court buildings. Notably, he protested against an Armenian court on Saturday that ordered to free former president Robert Kocharyan on bail from pre-trial detention.

Sanasaryan commented on the situation as follows: "We have come here to express our protest as citizens.

"We had to do it immediately after the revolution. We had a chance to correct this mistake. However, the system did not take advantage of this opportunity. It proved to us that they did not put pressure on the court. We look forward to Pashinyan's statement."

"Even in some areas the windows of the court buildings were broken. Judges and court officers are not allowed to the buildings.

"In fact, the decision to free ex-president Kocharyan from pre-trial arrest can be considered a spark for the start of actions for changes in the judicial system. The revolution can achieve goal as long as the whole system changes, or achieve success in that direction. In Armenia, parliamentary elections were held in the background of the events that took place one year ago. Political forces supporting Nikol Pashinyan have won this campaign. However, despite the fact that in Armenia they control two of the three branches of the government, the judicial system is left over from the past government. In today's appeal, Pashinyan called the justice system illegitimate and considered it a heritage of the old regime. Therefore, it is important to make changes in this system in line with the requirements of the revolution.

Incidentally, Robert Kocharyan's arrest was not an ordinary event for Armenia the same as his release. On July 1, 2018, he was arrested in connection with the events that took place on March 1, 2008. This event affected the further tension of the Russian-Armenian relations. In other words, this step of the Nikol Pashinyan’s government could have been a destructive, guiding event for Armenia's foreign policy course. That's why the new ruling elite shown as it steers away from Kremlin. Although in the next period official Yerevan was very keen to normalize relations with Moscow, it has not yet won the confidence. Russian President Vladimir Putin's who postponed his visit to Armenia can be shown as example. Recently, news released about his official visit to Yerevan on October 1. The release of Robert Kocharyan can be regarded as a gift to the Russian president. Even during his imprisonment, Vladimir Putin wrote a letter to the former president of Armenia calling him "friend".

In any case, the release of Putin's friend has been presented as a problem in the judicial system. It turns out that the Armenian justice system does not act in the name of self-interest. It is likely that certain concessions will be made on the case of former Defense Minister Seyran Ohanyan, secretary general of the Collective Security Treaty Organization (CSTO), Yuri Khachaturov and former Deputy Prime Minister Armen Gevorkyan, charged with the same items with Kocharyan. Notably, on February 19, 2008 rally was held on March 1 and 2 in protest against the falsification of the results of the presidential elections in favor of Serzh Sargsyan. 10 people, including two police officers, were killed and more than 200 protesters were injured as a result of the clash. By the way, they are charged with imprisonment from 10 to 15 years on the articles against them. They are condemned to overthrow the constitutional order and to commit a large bribe, to legalize the illegally obtained funds. It is obvious that Pashinyan is unable to carry out reforms in the judicial system. Several months ago, Robert Kocharian's lawyer, David Grigorian, was sentenced to administrative punishment. There was a lack of judges for a while to conduct the trial of the former president. Then Grigorian was entrusted with this work. He also "coped with his job" and released Kocharyan for a thousand dollars in bail. Whereas, in case of Yuri Khachaturov more than $ 10,000 given on bail.

In this regard, Pashinyan called on the citizens of the country to take action to prevent mischief in the justice system. Reforms in this area may lead to the closure of processes began a year ago or to the breakup of the established new governance system, which ultimately leads to the collapse of the Pashinyan’s government. Hence, Pashinyan and the political forces supporting him, along with the supreme legislative and executive body, are also trying to take full control of the judicial system. It would be more expedient to finish it in two phases: change of president and a new constitution. Armen Sargsyan, who is currently on a business trip outside the country, has appealed to the public about the situation in the country. He emphasized the importance of legislative, executive and judicial systems to serve the constitution. If dissatisfied President Armen Sargsyan's future political career is not solved for the continuation of the process, the opposition to Pashinyan may gather around it and subsequently emerge. This mass protest has also clarified another issue. The Prosperous Armenia Party led by billionaire Gagik Tsarukyan defended Nikol Pashinyan a year ago. His supporters did not appear in current protests.

This political organization called on Nikol Pashinyan to stop the protest action. This shows that the process initiated by Pashinyan against Sarukhan is giving its results. Armenia's ombudsman, Arman Tatoyan, also accused the prime minister of acting against the country's constitution.

Finally, the release of Kocharyan showed the strength of the Karabakh clan. As it is known, Robert Kocharyan is a former citizen of Azerbaijan and one of the leaders of the Khojaly genocide. The current head of the separatist regime in Karabakh, Bako Saakyan and former head Arkadi Gukasian vouched for his release. It should be taken into account that the Armenian separatists in Karabakh are generally ruled by Moscow. It turns out that Moscow vouched for Kocharyan.

Naturally, such a question arises:

With what status will Robert Kocharyan receive Vladimir Putin in Yerevan in October? Is the release of the former president a new course that Russia has started towards Armenia?

Thus, the protest action in front of the "Adekvad" Public Union in front of the European Union office in Yerevan gives rise to assumptions that new events will take place. Participants of the rally were holding "Take your puppets back!" and "Armenia under occupation!" posters. The organization said that Nikol Pashinyan is the only demonstration of sabotage that leads Armenia to statehood, while the main knots of control is in the hands of secret agents through the network of foreign agents. Last year, participants in the action called Russia an invader, holding a slogan post in their hands. In all cases, Nikol Pashinyan and the political force supporting him are facing a new test. Country community is already divided: European, pro-Westerners and those who love Russia - pro Russians. The conflict between them can be a basis for a new confrontation.