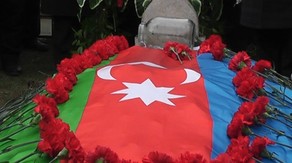 On March 25, a serviceman of Azerbaijani Armed Forces, sergeant Elshad Raguf Abbaszade was killed in the battle with invaders on the frontline.

Defense Minister, Colonel-General Zakir Hasanov awarded the Azerbaijani serviceman posthumously with the medal of the 3rd degree for distinction in military service.

The ministry extended condolences to the family and relatives of the martyr.