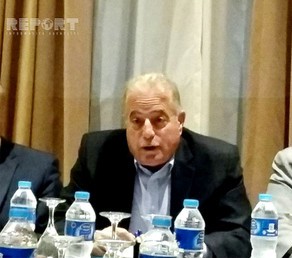 " Azerbaijan and Egypt have close friendships. I wish that these relations further developed".
This was said by the governor of South Sinai province, Khalid Fouda at the meeting with Azerbaijani journalists.

He reminded that during his visit to Azerbaijan an agreement on establishment of brotherly ties between the cities of Gabala and Sharm El Sheikh was signed.

The governor also said that in the near future delegation which will present the tourist potential of the region will leave for Azerbaijan from the province. "I also invited the head of the Executive Power of Gabala region Sabuhi Abdullayev to Sharm El Sheikh. I hope that he will accept my invitation."

Responding to a question about how many Azerbaijanis visiting Sharm El Sheikh in the year H.Fouda said that about 7,000 people a year coming to the resort: "The opening of the direct flight helped to raise this number. It should be noted that most of the passengers of the existing flight Tbilisi-Sharm El Sheikh are not Georgians but Azerbaijanis."

H.Fouda also raised the issue of security in Sharm el-Sheikh after Russian plane crash. According to him, the city ensures complete safety:"I want to assure you that safety recommendations presented to us by Russia, Germany and the UK have been completely fulfilled.They were associated mainly with the provision of additional security measures."

"Since 2005, there has not been committed any act of terrorism in Sharm El Sheikh.In addition, the city carried out and planned numerous activities at different levels. This is a message to foreign countries that security measures are underway in the city. Now the ball is in court of those countries that do not allow their citizens to visit Sharm El Sheikh", the governor of the province said.