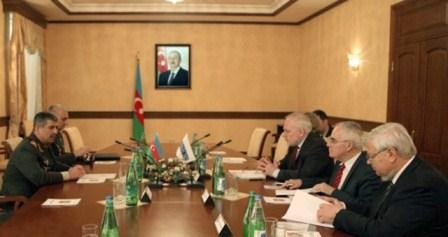 During the meeting the situation on recent incidents occurred along Armenian-Azerbaijan line of confrontation have been discussed and colonel-general Hasanov has drawn the delegation's attention to the facts of how our settlements and civilians have been exposed to shelling and firings.

The Defence Minister stressed: "We were deeply upset due to losses and deaths among innocent people. We do not fight with children and women as the opposite side does. By order of the Supreme Commander in Chief of the Armed Forces. Mr. Ilham Aliyev, and also considering Azerbaijan people's peacefulness we did stop the military operations. However, despite reached agreement, the units of the Armenian Armed Forces still continue to violate the ceasefire regime."

Colonel-general Hasanov emphasized that Azerbaijan would never get along with occupation and will preserve its rights to liberate its territories from the enemy, and he informed the co-chairs that the purpose of Azerbaijan Armed Forces in recent incidents was to prevent Azerbaijan villages, close to the contact line, from enemy's suppressing fire and also destruction of those firing positions. Only Azerbaijan's frontline forces were involved in the activities against the hostile forces.

The Defence Minister also mentioned that the Armenian servicemen suffered from great losses during the combat clashes and the contractors recruited from different locations fled their positions leaving their weapons and ammunitions behind.

Colonel-general Hasanov also stressed that the units of Azerbaijan Armed Forces continue to reinforce fortifications in the freed territories. During the meeting the Minister re-emphasized that the sole way in immediate settlement of the conflict is withdrawal of the occupying forces from our territories.

The co-chairs appreciated reached ceasefire agreement between the parties and mentioned the importance of intensifying negotiation process on Armenia-Azerbaijan Nagorno-Karabakh conflict and quite tangible measures are to be taken to solve the conflict in the shortest period of time.