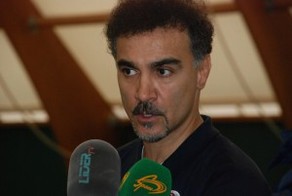 Members of Azerbaijani Greco-Roman wrestling national team commented on the events occurring on the frontline during recent days.

Head coach Jamshid Kheyrabadi prayed for martyrs of the battle with Armenians and expressed condolences to their relatives and to Azerbaijani people.

He said: 'Hopefully, truth will be established and Azerbaijan's Karabakh will be freed again'.
Wrestler Elvin Mursaliyev stressed that liberation of one part of Azerbaijani lands during the battles causes feel pride.

His team-mate Kamran Mammadov said that superiority of Azerbaijan army on the frontline stiffened the spirit. He expressed condolences to the families and relatives of the killed servicemen and wished patience: 'I believe that the day will come when Azerbaijani flag pinned in Shusha, Khankendi'.