The return of 6 districts is discussed - Nalbandian 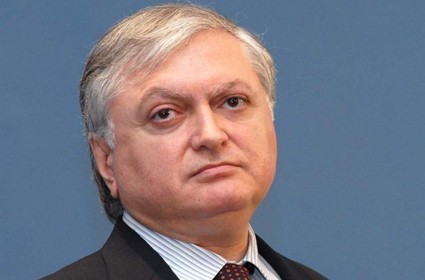 Armenian minister answering to question of Armenia’s Public TV eludicated the essence of negotiations between Azerbaijan and Armenia on the settlement of Nagorno-Karabakh conflict.

According to him, the working papers discussed by the sides are previously discussed. The documents that do not conducive to progress the negotiations are being deposited in the office of the OSCE in Vienna.

So far, Kazan document is not given for keeping. All other comments inappropriate, "-Nalbandian said.


Note that, a few days ago, it has been noted that the agreed principles before the Kazan meeting of Azerbaijani and Armenian presidents in 2011, can be taken as the basis in the settlement of the Nagorno-Karabakh conflict.

According to that document, the basic principles of settlement should be signed primarly, and then Armenia and Azerbaijan begin work on the peace treaty under the mediation of the US, France and Russia.

Yerevan must remove its occupying troops from surrounding 7 districts. These areas include Fizuli, Agdam, Jabrayil, Zangilan, Gubadli, Kalbajar districts and 13 villages of Lachin. International peacekeeping forces are tasked with maintaining security in those areas.

The Lachin corridor is established to connect Armenia and Karabakh.


The legal status of Nagorno-Karabakh should be determined through a referendum a few years later, a condition that the displaced persons to return to their fatherlands. The main statute in this document that Baku and Yerevan should refuse in the form of a legally binding the use of force to settle disputes.