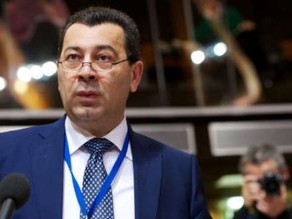 The head of the Azerbaijani delegation to PACE, MP Samad Seyidov said at the PACE spring session.

Azerbaijani MP said that "if we appease the aggressor, it does not give good results and lead to tragedy."

S.Seyidov also regretted the fact that at the last session of the PACE in January, the report on Nagorno-Karabakh has not been adopted: "The failure of the report paved the way for the Armenian aggressors."

In his speech, SSeyidov said that Azerbaijan stands for peace: "The Armenians held ethnic cleansing in Karabakh. Now there and in Armenia do not live the Azerbaijanis, despite 30 thousand Armenians live in Azerbaijan. We offer to meet that the Armenians from Karabakh and those who were expelled from there will be brought together and decide the contradictions."