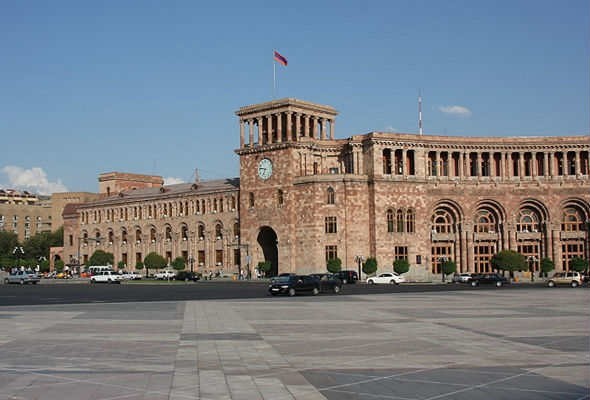 There is plenty of evidence about Armenians smuggling nuclear materials and their attempts sell radioactive materials outside the country.

On 22 May 1999, two Armenians tried to sell 20kg U-235 enriched uranium in the Ukrainian town of Beregovo but were detained by law enforcement agencies in Ukraine. Armenians had asked for 35,000 dollars for 1kg uranium, APA reported.

During a reconnaissance operation in Georgia’s Samskhe-Javakheti region on 19 December 200, 300g low-enriched uranium was seized. Investigation made it clear that the material had been brought from Armenia.

On 26 June 2003, Armenian citizens tried to smuggle 170g highly enriched uranium U-235 through the border between Armenia and Georgia (Sadakhli-Bagratashen checkpoint).


170g uranium was seized from the detained Armenia citizen, Garik Dadadyan seized. Dadadyan was transferred to Armenia, where criminal proceedings were instituted against him. He was sentenced to imprisonment for a period of only two years and a half. This fact indicates that government authorities defend Armenians smuggling radioactive materials.


At the Mehri checkpoint on the Armenian-Iranian border on 23 December 2003, a container with radioactive Strontsium-90 brought from Metsamor Nulcear Power Plant was detained. Spectral analysis revealed that the object was highly radioactive.


On the Armenian-Georgian border (Sadakhli-Bagratashen checkpoint) on 13 March 2004, Armenian citizen was detained for possessing radioactive materials. However, the incident has not been made public.


On the Georgian-Turkish border (Sarpi checkpoint) on 24 October 2007, 2.04g Lawrence-103 was discovered in a special golden container. As a result, 4 Armenian citizens were detained.


On the Armenian-Georgian border (Sadakhli-Bagratashen checkpoint) on 26-28 August 2009, traces of the substance cesium-137 were detected in a car owned by a resident of the Noratus village of Armenia’s Gerarkunik region. However, the substance itself was not found, so the passenger was released and returned to Armenia.

In Tbilisi in March 2010, businessman Smbat Tonoyan and a member of the Yerevan Institute of Physics, Hrant Ohanyan, were detained on suspicion of illegal sale of radioactive materials. 18g uranium enriched up to 89 percent was seized from them. During their trial in Tbilisi, it became clear that Tonoyan initially required of a potential buyer $8 million in exchange for 120g enriched uranium but lowered the price to $1.5 million. He was supposed to show the buyer 18g product as a sample. Tonoyan had received the confiscated uranium from Armenian citizen Garik Dadayan who had been arrested for uranium smuggling in Georgia in 2003. After serving a light punishment for the smuggling of radioactive materials in 2003, he continued to engage in this activity.


On 16 September 2010, a criminal group, one of whose members was an Armenian, was arrested at the Tbilisi airport. 0.0004kg plutonium (Pu) and 0.00008kg low-enriched uranium was found and seized from the detainees. Investigation revealed that the criminals were planning to sell the radioactive materials.


At the border between Armenia and Georgia (Sadakhli-Bagratashen checkpoint) in August 2014, Georgian customs officials arrested two Armenians for trying to smuggle radioactive material Sezyum-137 into Georgia.

In April 2016, Georgia’s State Security Service arrested three Armenian and three Georgia citizens for trying to sell 200g Uran-238. It became clear that the three Armenian citizens used to work at Metsamor. The group planned to sell radioactive materials in the Middle East.


There is no doubt that in case these materials fall into the hands of terrorist groups like IS and Al Qaeda, most of the world may face serious catastrophes.