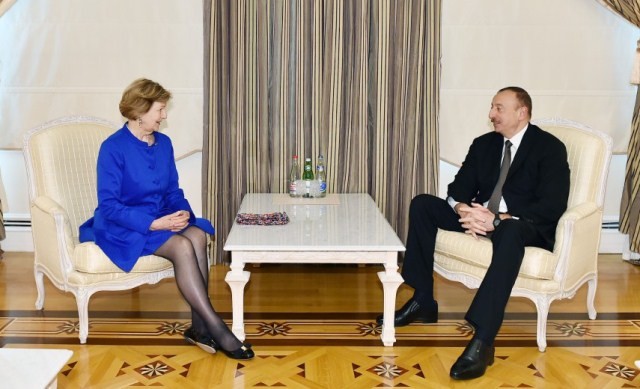 Praising Baroness Nicholson's participation in the opening ceremony of the 23rd International Caspian Oil & Gas 2016 Exhibition, the head of state expressed his gratitude for UK Prime Minister David Cameron's message addressed to the exhibition participants and for his remarks about friendly relations.

Pointing to the successful cooperation between Azerbaijan and the UK in energy sector, the head of state stressed that bilateral relations between the two countries covered a number of other areas too.

President Ilham Aliyev underlined his country's interest in more active cooperation with British companies specializing in agriculture, technology, infrastructure projects and other fields, and emphasized the significance of the activities of the joint working group in this regard.

The British Prime Ministerial Trade Envoy Baroness Nicholson extended British Prime Minister David Cameron's greetings and best wishes to the head of state. Saying she was delighted to participate in the opening ceremony of the 23rd International Caspian Oil & Gas 2016 Exhibition, Baroness Nicholson noted she was honored that her country was an important partner of Azerbaijan.

Baroness Nicholson said as the British Prime Ministerial Trade Envoy she would spare no efforts to further strengthen relations between the two countries.

President Ilham Aliyev expressed his gratitude for the greetings of David Cameron and asked Baronessa Nicholson to extend his greetings to the British Prime Minister.