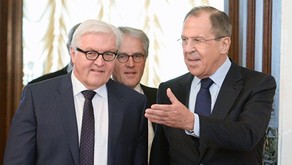 Russian and German foreign ministers have discussed the Nagorno-Karabakh conflict.

According to the Russian RIA Novosti, Sergei Lavrov and Frank-Walter Steinmeier discussed the prospects of promoting the Karabakh settlement based on results of the visit of German Minister as the OSCE Chairperson-in-Office in Yerevan and Baku.

The parties also held discussions on settlement of Ukrainian crisis.