Next monitoring will be held on the line of confrontation 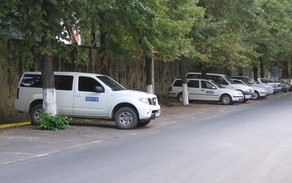 The next ceasefire monitoring exercise will be conducted on the Line of Confrontation (LOC) of the armed forces of the Armenia and Azerbaijan.

In accordance with its mandate, the Office of the Personal Representative of the OSCE Chairperson-in-Office plans to conduct the next ceasefire monitoring exercise on the LOC, south of the town Horadiz, in Fizuli region of the Republic of Azerbaijan on July 15, 2016.

The Personal Representative`s field assistants, Jiri Aberle, Simon Tiller and representative of the High-Level Planning Group (HLPG), Lieutenant-colonel Dan Harvey will carry out the monitoring exercise from the territory of Azerbaijan controlled by its Armed Forces.

The Personal Representative`s field assistants, Hristo Hristov, Peter Svedverg and head of the HLPG, Colonel Hans Lampalzer will participate on the other side of the LOC, in the territory of the Republic of Azerbaijan occupied and controlled by the armed forces of Armenia.