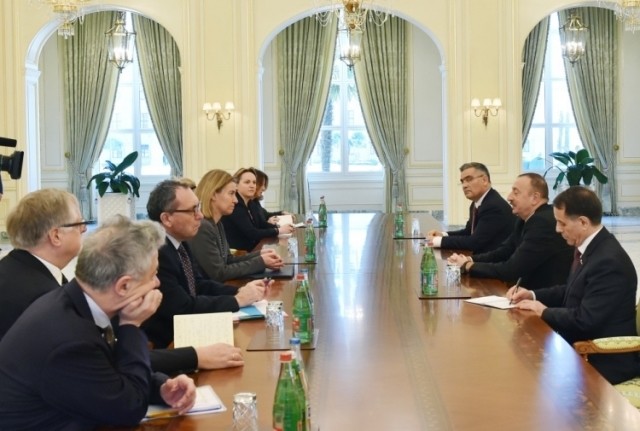 President of the Republic of Azerbaijan Ilham Aliyev and High Representative of the EU, Vice-President of the European Commission Federica Mogherini have held an expanded meeting.

The head of state said Federica Mogherini`s visit created a good opportunity for looking through the important issues of cooperation between Azerbaijan and the EU.

The head of state said Azerbaijan-EU cooperation was at an important stage now, stressing the importance of defining future plans of this collaboration.

The head of state said there was mutual interest in increasing the level of partnership and expanding ties, pointing to the existence of mutual understanding in this regard. President Ilham Aliyev noted the significance of President of the European Council Donald Tusk`s visit to the country last year. The head of state also emphasized the importance of his discussions on future cooperation plans with EU Commissioner for the European Neighbourhood Policy and Enlargement Negotiations Johannes Hahn when they recently met in Munich.

President Ilham Aliyev expressed his hope that Azerbaijan and the EU would elaborate a cooperation format for establishing long-term and fruitful partnership that would cover various fields.

High Representative of the EU, Vice-President of the European Commission Federica Mogherini expressed gratitude for high-level organization of the Meeting of the Southern Gas Corridor Advisory Council. Federica Mogherini described this as a good indicator of cooperation between Azerbaijan and the EU. She said cooperation between Azerbaijan and the EU would be continued in a new format, adding there was a firm legal base for this.

Federica Mogherini said Azerbaijan was situated in a complex region, underlining the significance of elevating the partnership between the country and the EU to a strategic level to ensure the interests of both sides.

Karabakh conflict, and exchanged views on other issues of cooperation.

The meeting then continued in a one-on-one format.