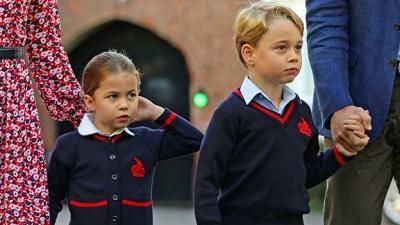 Princess Charlotte is "very excited" about starting school, the Duke of Cambridge said as he dropped her off for her first day.

Walking across the playground with both parents and her brother, Princess Charlotte smiled as she met the head of the lower school at Thomas's Battersea.

Prince George has attended the private school in south west London since 2017.

He began his first day of year two - his final year in the lower school before he moves to the middle school.

Princess Charlotte, four, was photographed meeting Helen Haslem at the side entrance of the school.

The duchess carried her daughter's backpack, which was decorated with a pink key-ring in the shape of a pony's head. She smiled as she greeted Ms Haslem and asked about her summer holidays.

Prince George was also photographed on his first day at Thomas's Battersea, a preparatory school located a few miles from the family residence in Kensington Palace, in September 2017.

He, too, was greeted by Ms Haslem, after Prince William drove him through the school gates. The Duchess of Cambridge missed the occasion as she was not well enough to take him.