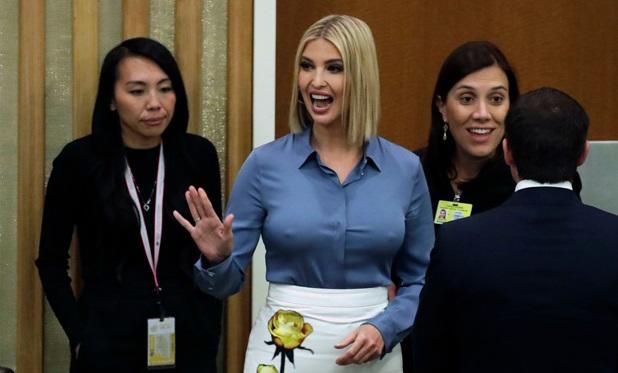 Ivanka Trump had a really busy weekend on the eve of the UN General Assembly in New York, as she attended designer pal Misha Nonoo’s Rome wedding, where she treated fashion fans to an eyeful of spectacular garments, ranging from a champagne colored sweeping gown with a cape to designer dresses made of glittering gold fringe.

Axar.az reports citing foreign media that Ivanka Trump may have sported a chic all business look for the UN General Assembly, where she arrived after a weekend attending the wedding of her friend, designer Misha Nonoo, but netizens were left guessing if perhaps she had forgotten to pack a bra.

That particular undergarment seemed conspicuously absent as she arrived wearing a thin blue blouse on 23 September while she watched her father Donald Trump‘s speech.