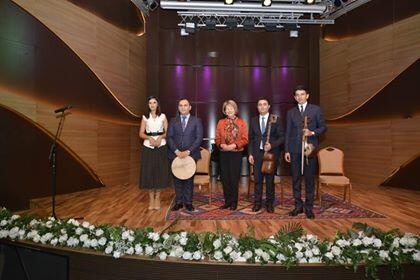 Axar.az informas that, Minister of Culture Abulfas Garayev briefed the guests on the musical culture and mugham art of Azerbaijan. He said that the Mugham Television Competition has been held since 2005 with the support of the Heydar Aliyev Foundation and with the participation of the Ministry of Culture for the preservation of mugham art, bringing rich performances to the next generation, and raising a new generation of performers. To this day, many young mugam singers have been successful in these contests and are promoting ancient art.

The Minister also emphasized that the inclusion of Azerbaijan's mugham art, tar and kamancha in the UNESCO Intangible Cultural Heritage List is an integral part of the unique cultural wealth of not only our people, but of the whole humanity.

Then a concert program prepared by the International Mugham Center was presented. Young singers Elgiz Aliyev and Nisbat Sadrayeva sang folk songs and classifications, as well as snippets of mugams "Bayati-Shiraz", "Segah" and "Rast". The singers were accompanied by Rashad Ibrahimov on the tar and Tabriz Yusifov in kamancha.

Welcoming the performers, Baroness Emma Nicholson said she had a great interest in music, especially in the genres of oral tradition. Information about these genres of Azerbaijani music is very interesting for him. The British guest thanked the performers and accompanists.

In the end, the guests took a souvenir photo in the lobby of the International Mugam Center.