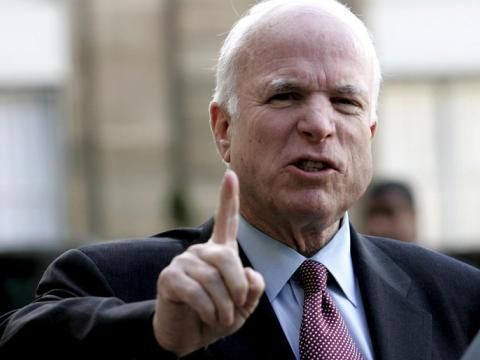 The Senate Armed Services Committee at a hearing today will examine potential Russian influence in the 2016 presidential election, but the panel is also embarking on an effort to take a broader look at U.S. cybersecurity strategy and cyberwar policy, according to panel Chairman John McCain (R-AZ).

The goal, McCain told Inside Cybersecurity, is to develop a comprehensive approach to cyberwar and deterrence that he believes has been missing from the Obama administration.

"It covers all kinds of aspects," McCain said of his committee's approach.

Congressional roles and responsibilities for addressing cyber issues -- including the Russia hacking issue -- are just coming into focus as the 115th Congress gets started this week.

Senate Majority Leader Mitch McConnell (R-KY) said on the floor Wednesday that the Intelligence Committee is tasked with conducting a "serious, comprehensive, and responsible" review of Russian cyber aggression in the 2016 election and beyond.

But McConnell also noted that the Armed Services Committee's work would help determine how to tie cyber capabilities with warfighting doctrine.

For his part, McCain said this and future Armed Services hearings will help fill gaps that the Obama administration has failed to fill on cyberwar policy.

"There is no policy by this administration," McCain said.

Today's hearing could also address broader cyber issues such as security of communications infrastructure and satellites, noting that Russia's activity is an "act of war" that needs to be addressed.

Today's hearing will feature testimony from National Intelligence Director James Clapper, along with Adm. Michael Rogers, who heads the National Security Agency and U.S. Cyber Command, and Under Secretary of Defense for Intelligence Marcell Lettre.

In addition to holding hearings, McCain has been calling for the creation of a cybersecurity-specific subcommittee within the Armed Services Committee, which would have to be approved by Senate Republican leadership.

"We will have a special -- additional subcommittee on cyber that my friend Lindsey Graham, I'm hoping, will be the lead on," McCain said in December.

Committee jurisdiction over cyber has been a contentious issue for lawmakers in recent months. In addition to McCain’s call for an Armed Services subcommittee, Sen. Cory Gardner R-CO), chairman of the Senate Foreign Relations cybersecurity subcommittee, has called for a permanent select committee on cybersecurity, but that proposal hasn't gained much traction.