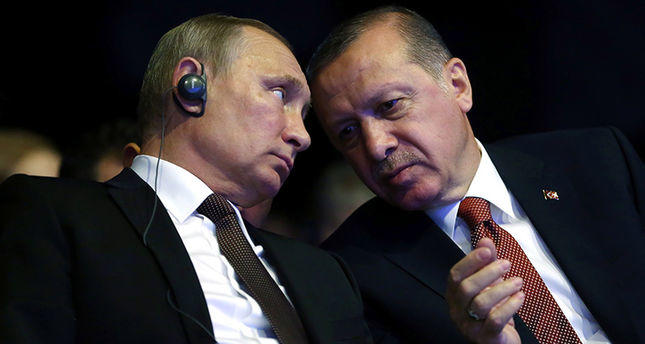 President Recep Tayyip Erdogan and his Russian counterpart Vladimir Putin are likely to meet next month within the scope of Turkey-Russia High Level Cooperation Council (HLCC), according to information obtained from diplomatic sources.

Despite a difficult period in ties between Russia and Turkey, relations between the two countries entered a new phase after a meeting between Erdogan and Putin in St. Petersburg on Aug. 9. Diplomatic sources revealed to Daily Sabah the three fundamental matters on Turkey's agenda ahead of next month's HLCC meeting, foremost of which includes the Joint Economic Commission that had initially convened back in Oct 2016 in Istanbul. The second matter on the agenda is the strategic planning group, which also convened in Dec 1 in Turkey's Alanya province with the attendance of Russian Foreign Minister Sergey Lavrov. The third and final matter on the agenda, according to sources, is the Civic Forum which has sub-committees such as the historical committee chaired by prominent Turkish historian İlber Ortaylı.

"The goal of the sub-committees under the Civic Forum is also to establish relations in the economic field and not leave relations only under the political field, while establishing solid relations. Another part of these goals also includes academic cooperation between the two countries since a meeting is expected to be held prior to the upcoming HLCC meeting," sources added. Regarding the existing sanctions from Russia, diplomatic sources further noted that the sanctions are gradually lifting-off and they affirmed that remaining sanctions are there due to sanitary restrictions, which are currently being discussed between the two countries.

While economic trade relations remain strong between Turkey and Russia, sanctions on more than 80 companies have been lifted according to information obtained from sources. Furthermore, visa free travel to Russia from Turkey is on the agenda of the two countries. Sources noted that "visa liberalization between Turkey and Russia is our expectation however they [the Russian side] has concerns due to security. However, I believe that visa free travel for businessmen and official delegations is a priority between the two." Touching upon the bilateral relations, particularly in trade and the economy, diplomatic sources have said that Turkey aims to return relations with Russia to their former position and even enhance them. The source, speaking on anonymity, also underlined that Turkey's enhanced relations with Russia is not an alternative to relations with Western states.