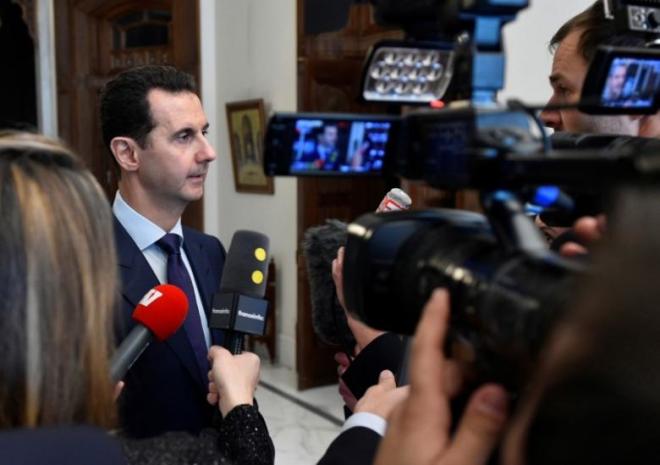 Syrian President Bashar al-Assad said he believed Russian-backed peace talks in Kazakhstan aimed to produce local "reconciliation" agreements with rebel groups whereby they would give up their weapons and receive a government pardon.

Axar.az reports that, Assad said in an interview with a Japanese TV station that it was unclear if the talks in Astana scheduled for next week would yield a political dialogue, "because it is not clear who will participate". He hoped the conference would be a platform to discuss "everything" with rebel groups, he said.

Local reconciliation agreements are the government's preferred method for pacifying rebellious areas. They amount to the effective surrender of rebels in a particular area, typically after years of government siege and bombardment.

Russia set the new diplomatic process in motion after its air force helped the Syrian government and allied Iran-backed militia to defeat rebels in the eastern areas of the city of Aleppo last month, the opposition's biggest defeat of the war.

"So far, we believe that Astana will be about talks with terrorist groups over a ceasefire" that would allow them to reach reconciliation deals, Assad said in the interview, excerpts of which were published on Twitter by the presidency.

Russia, Assad's most powerful ally, has played a leading role in organising the Astana talks with help from Iran and Turkey, which backs the opposition but has switched its priorities to fighting Kurdish groups and Islamic State.

A number of Turkey-backed rebel groups fighting under the Free Syrian Army banner have agreed to attend the talks in Astana. The rebels say the talks must focus on shoring up a ceasefire that was brokered by Russia and Turkey last month.

The rebels accuse the government of violating the ceasefire on many frontlines, including the Wadi Barada area near Damascus where government forces and Lebanon's Hezbollah are waging a campaign to capture the capital's main water source. Assad has also accused rebels of violating the deal.