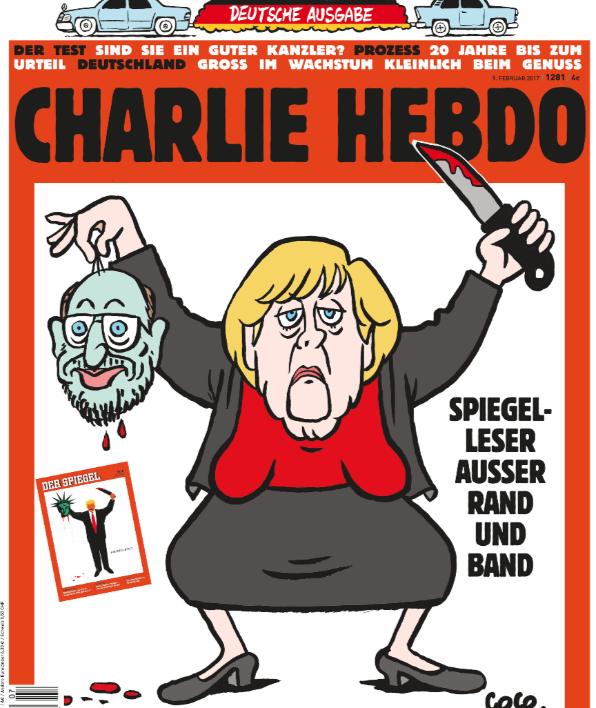 The satire magazine "Charlie Hebdo" placed on the cover of his German-language edition for Thursday Federal Chancellor Angela Merkel (CDU) with a bloody knife in the left hand. In the other, she holds the severed head of her electoral rival Martin Schulz (SPD).

At the same time, in the left-hand corner of the title page, the controversial "Spiegel" -cover of February 4, which shows the US State Secretary Donald Trump in a similar pose with the head of the Statue of Liberty.

The caption of the satirists reads: "Mirror readers beyond borders and bands".

According to the editor-in-chief of the German "Charlie Hebdo" edition, which appears under the pseudonym Minka Schneider, the "Mirror" title is a gesture of respect for the colleagues in Hamburg, reports the "Bild" newspaper.

"What shocked us the most was the negative echo on it", quotes the Blattschneider. "We find this title page pretty good."

"We know the accusation of violating good journalistic customs," says the "Charlie Hebdo" editorial in a column. "This is how we sit in the same boat, because in the center of polemic, with you as with us, the debate is about freedom of expression and the way you use it. Or not. "

At the end of January the then SPD boss Sigmar Gabriel had resigned surprisingly. The former President of the European Parliament, Martin Schulz, took his place and became a candidate for the party's chancellor . He is against Chancellor Angela Merkel, who had announced her renewed candidacy for the CDU in November. The so-called Schulz effect has brought the SPD immediately a survey high. For the first time since 2006 the party was in the current week in a survey before the CDU.