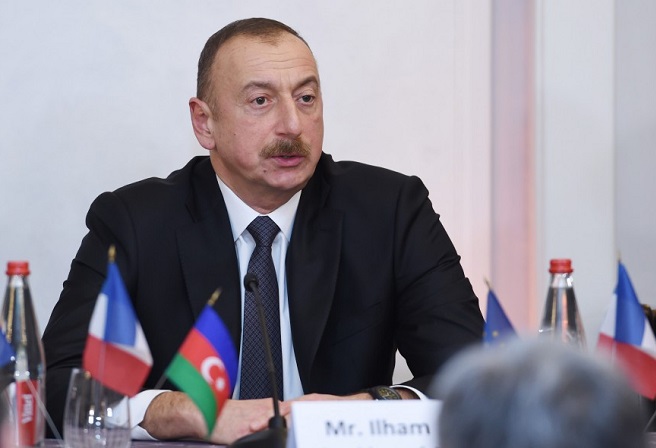 France is a co-chair of the OSCE Minsk Group on the settlement of the most serious problem in the region, Armenian-Azerbaijani Nagorno-Karabakh conflict: "As a result of military aggression of Armenia, 20% Azerbaijani territory - our historical land Nagorno-Karabakh and adjacent 7 regions have been occupied, ethnic cleansing carried out and more than one million citizens became refugees and internally displaced people (IDP).

Axar.az reports that, Azerbaijani President Ilham Aliyev said in dinner party hosted by the French President François Hollande for the President of the Republic of Azerbaijan Ilham Aliyev and first lady Mehriban Aliyeva.

The head of state said: "Nagorno-Karabakh is eternal and historical Azerbaijani land. Territorial integrity of our country cannot be subject of talks".

The UN Security Council has adopted four resolutions, also were approved relevant decrees and resolutions of the UN General Assembly, OSCE, NATO, European Parliament, Parliamentary Assembly of the Council of Europe, Non-Aligned Movement, the Organization of Islamic Cooperation and other authoritative international organization on the conflict. The conflict must be solved according to the norms of the international law and within the territorial integrity of Azerbaijan. The status quo is unacceptable. France, as other co-chairs, repeatedly made statements about it. Unfortunately, Armenia ignores them and continues its aggressive policy".