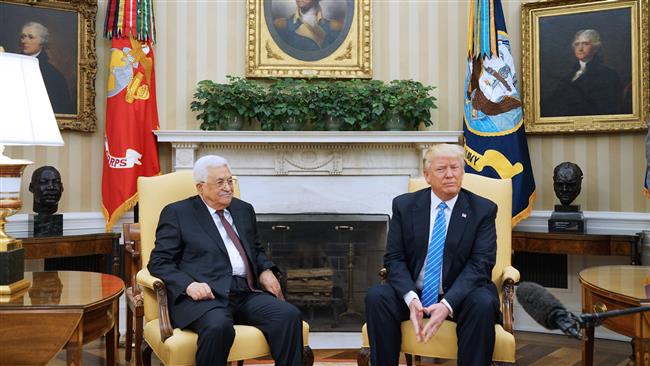 President Donald Trump on Wednesday vowed to work as a "mediator, an arbitrator or a facilitator" to help broker peace between the Israelis and Palestinians as he welcomed Palestinian Authority President Mahmoud Abbas to the White House.

Axar.az reports citing to CNN Trump said Israelis and Palestinians must achieve peace through direct negotiations and called on Palestinian leaders to "speak in a unified voice against incitement to violence and hate."
"There's such hatred, but hopefully there wont be such hatred for very long," Trump said in a joint appearance with Abbas.
Abbas expressed his support for a two-state solution and reiterated the Palestinian desire for a capital in East Jerusalem and said he believed Trump could help broker the long-sought after peace.

"You have the determination and you have the desire to see it come to fruition and become successful," Abbas said.
Abbas' visit comes more than two months after Israeli Prime Minister Benjamin Netanyahu visited Trump at the White House, where the two men's chummy relationship was on full display.
But while Trump's meeting with Netanyahu signaled an era of warmer US-Israel relations than had existed under President Barack Obama, Trump also slightly moderated his stance on the Israeli-Palestinian conflict from the unequivocal support he promised Israel during the campaign.

Trump urged Netanyahu to "hold back on settlements for a little bit," and while he said he'd "love" to see the US embassy move to Jerusalem, he offered no indication it would happen soon.
Vice President Mike Pence on Tuesaday said Trump is giving "serious consideration" to moving the US Embassy from Tel Aviv to Jerusalem, which he pledged to do during the presidential campaign, but did not offer a timeline for that move.

Trump must decide by June 1 whether to sign a six-month waiver forestalling a move. Every US president has signed such a waiver twice a year after a law was passed in 1995 mandating the relocation of the embassy unless the White House certifies doing so would raise national security concerns.