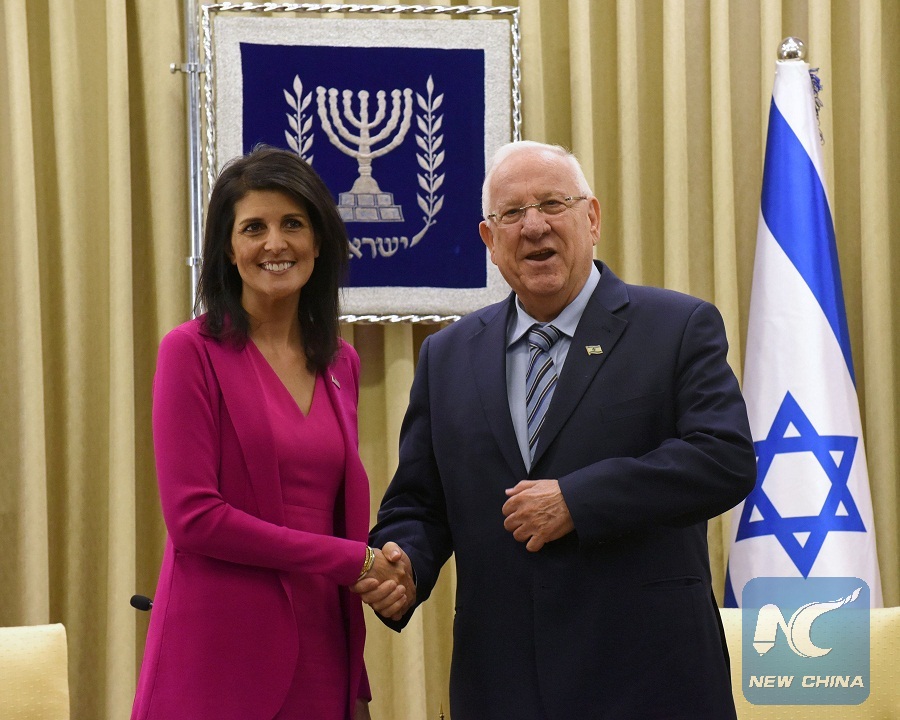 U.S. ambassador to the United Nations Nikki Haley met Wednesday with Israeli Prime Minister Netanyahu in Jerusalem amid a tour to the region and accused the UN of "bullying" Israel.

The pro-Israeli ambassador arrived in Israel for a day after she threatened that the U.S. will leave the UN Human Rights Council over what she said was the agency's "bias" against Israel.

In the meeting with Prime Minister Benjamin Netanyahu on Wednesday in the Prime Minister's Office in Jerusalem, she said "If there's anything I have no patience for is bullies, and the UN was being such a bully to Israel, because they could."

Haley, who has been acting to cancel the Council's permanent Agenda Item Seven, a regular slot calling for the examination of the human rights situation in "Palestine and other occupied Arab territories," said the U.S. is "starting to see a turn" in the UN's attitude toward Israel.

"I think they know they can't keep responding in the way they've been responding," she said.

"They sense that the tone has changed. We were talking with some ambassadors in Geneva and, that are all on the Human Rights Council, and we talked to them about Agenda Item Seven, some of them, they were embarrassed by it and they acknowledge the fact that it just makes no sense."

Netanyahu thanked her for her "help and standing up for Israel." Netanyahu, who frequently slams the UN over its calls to end the Israeli occupation of the West Bank and Gaza Strip, said that President Donald Trump and Haley "have changed the discourse, have drawn new standards, and everybody's taking up."

She is expected to visit the West Bank cities of Ramallah and Bethlehem, but it was unclear which leaders she will meet there. It is her first official visit to the region.

The former governor of South Carolina, have spoken out forcefully against attempts by UN's bodies, mainly the Human Rights Council, to hold Israel accountable for human rights violations in the West Bank and Gaza and to force the Jewish state to stop its 50-year-long control of these territories.

On Tuesday, she said the U.S. is "reviewing its participation" in the 47-member Council over its alleged "chronic anti-Israel bias."

Her visit to region follows a visit by Trump last month. Trump met with Netanyahu and Abbas as part of the White House efforts to revive the peace talks between Israel and the Palestinians. The last round of talks, brokered by former Secretary of States John Kerry, collapsed on April 2014.

Israel seized the West Bank and Gaza during the 1967 Middle East war and has been controlling them despite international criticism.