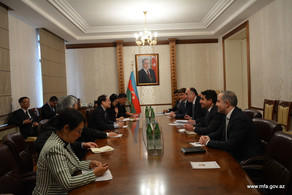 Mammadyarov expressed his satisfaction with the development of bilateral relations between China and Azerbaijan, and emphasized the role of friendly relations between the heads of state of two countries, as well as the recent intensification of mutual visits, the Foreign Ministry told Axar.az.

Minister Mammadyarov mentioned that Azerbaijan actively supports China's "One Belt, One Road" initiative, and pointed out that the Baku-Tbilisi-Kars railway, which was put into operation on October 30, 2017, provides vast opportunities for cooperation in the field of cargo and passenger transportation. He also said that Azerbaijan is interested in more active representation of Chinese companies in the economy of Azerbaijan, especially in the non-oil sector.

Cheng Guoping stated that the Chinese government attaches great importance to the development of relations with Azerbaijan and noted the huge potential for cooperation between the two countries. Saying that Azerbaijan is one of the important countries of the Silk Road he expressed his hope for Azerbaijan's closer engagement with the "One Belt, One Road" project.

Guoping stressed also the importance of continuing the strategic cooperation and partnership between the governments of Azerbaijan and China in the sphere of fighting against terrorism. In this regard, Mammadyarov underlined that Azerbaijan supports combating all forms and manifestations of terrorism and that China and Azerbaijan have the same position on counter terrorism initiatives within the international organizations.

The sides also exchanged views on other issues of international and regional character.