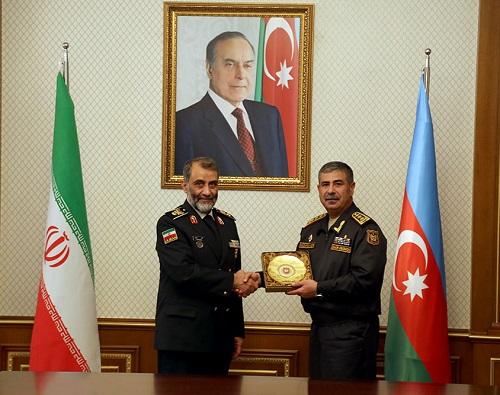 Minister of Defense of the Republic of Azerbaijan Colonel General Zakir Hasanov has met with a delegation led by Major General Qasem Rezaee, commander of the Border Guard of the Islamic Republic of Iran.

Axar.az reports citing the press service of the Defense Ministry.

Colonel-General Hasanov brought to the attention of the guests the military-political situation in the region, stressing that the unresolved Armenia-Azerbaijan, Nagorno-Karabakh conflict still poses a threat to regional stability.

Noting that religious, historical and cultural ties between our states are based on good, friendly traditions, Major General Rezaee stressed that, like in other areas, there is also great potential for cooperation between Iran and Azerbaijan in the military sphere. He stated that Iran supports the territorial integrity of Azerbaijan and its just position in connection with the settlement of the conflict.

During the meeting, the parties held a comprehensive exchange of views on the prospects for military cooperation between the armies of Azerbaijan and Iran, as well as other issues of mutual interest.