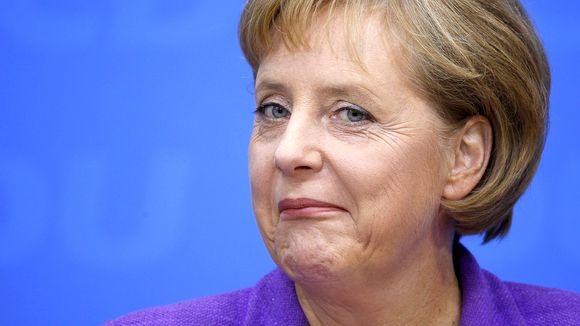 German Chancellor Angela Merkel was among the last Western leaders to congratulate Vladimir Zelensky on his landslide victory in Ukraine’s runoff presidential election on Sunday.

Axar.az reports citing foreign media that "I congratulate you on being elected to the Ukrainian presidential post with all my heart," Merkel said in her telegram sent to Zelensky and published by the German cabinet’s press service on Monday.

Merkel noted that since the Ukrainian revolution of 2014 the two countries have stepped up their relations both in political, economic, cultural and public areas.

"I care about stabilization in Ukraine and a peaceful solution to the conflict as well as holding key reforms of judicial bodies, decentralization of power and fight against corruption," Merkel said. "The German government in the future will continue actively supporting Ukraine, especially in its right to sovereignty and territorial integrity."

"I would be happy to soon receive you in Berlin," Merkel said, wishing Zelensky good luck and success on this post.

Ahead of the runoff election in Ukraine, on April 12 Merkel met in Berlin only with incumbent Ukrainian President Pyotr Poroshenko. Meanwhile, French President Emmanuel Macron met with two candidates. Some German experts noted that this was the first time when a German chancellor met with one of the presidential candidates ahead of the runoff.

Ukraine’s runoff presidential election was held on April 21. With 97.65% of the vote counted, showman Vladimir Zelensky, a candidate of the Servant of the People party, is winning by a landslide with 73.14% of the vote. Pyotr Poroshenko, who has ruled the country for five years, gets 24.53%.