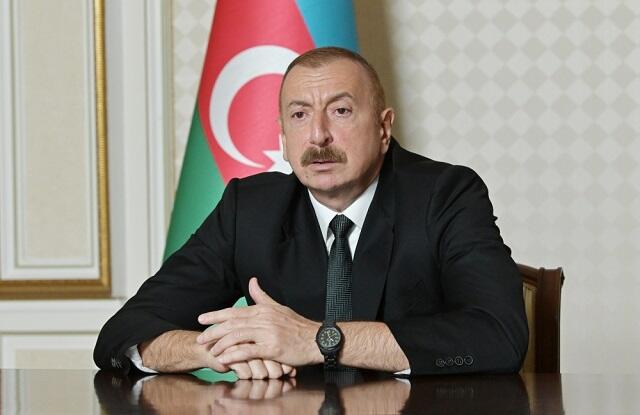 In the early stages of my presidency, I had hopes associated with the settlement of the conflict. The negotiations were going on to some extent. Albeit small, but progress was being made, certain steps were taken. The return of the occupied lands was in our interests, but equating the principle of self-determination of peoples with the principle of territorial integrity never suited us. However, as was the case with most of the Azerbaijani people, my hopes had dried up.

Axar.az reports that the statement came from President Ilham Aliyev in his address to the nation

I said back then and I want to say again that we need to think carefully and weigh up when and what to do, how to do it and at what point. We must deal with such a blow for the enemy not to be able to recover. We must deliver such a blow for the enemy never to venture to raise its head again more. This war is our glorious Victory. We are proud. But our goal is to prevent Armenian fascism from raising its head in this region. If someone wants to provide Armenia with the territory for the establishment of a second state, let them give them a part of their territory. But to demand that an Armenian state be created on historically and legally Azerbaijani lands – it defies all logic? This does not fit into any logic or justice. What do you want from our lands? Countries located thousands of kilometres away from here are now adopting laws, their parliaments are discussing this issue. What does the French parliament have to do with this issue? How many years has France been co-chairing the Minsk Group? Has it lifted a finger? Has it taken a tangible step to address this issue? But look at what happens after this issue has been resolved. The French Senate adopts a resolution to recognize Nagorno-Karabakh.

If you like them so much, then, as I said during the war, give the city of Marseille to the Armenians, change its name, create a second state for them there. But no-one can interfere in our affairs. I want to say again that the concept of the “Nagorno-Karabakh conflict” has already been consigned to history. I would not advise anyone to use this term. Of course, it is possible to use this term only if we speak about history.