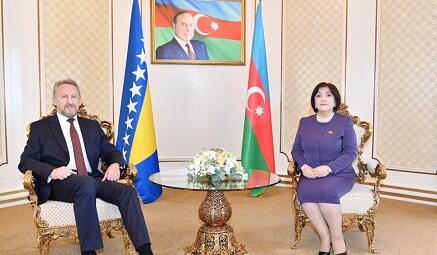 On June 9, Speaker of the Milli Majlis Sahiba Gafarova met with Chairman of the House of Peoples of the Parliamentary Assembly of Bosnia and Herzegovina Bakir Izetbegovic, who is on an official visit to Azerbaijan.

Axar.az reports that the press and public relations department of the parliament told that the guest first got acquainted with the conditions created in the administrative building of the Milli Majlis.

Then a meeting was held between the parties. The sides agreed on the level of relations between the two countries, and noted the importance of expanding our cooperation in many areas.

Noting that the existing legal framework between Azerbaijan and Bosnia and Herzegovina creates good opportunities for expanding cooperation in many areas, Gafarova said that projects implemented in the humanitarian sphere, in particular, contribute to the development of friendly relations between our peoples. He stressed the activity of the Heydar Aliyev Foundation in this field.