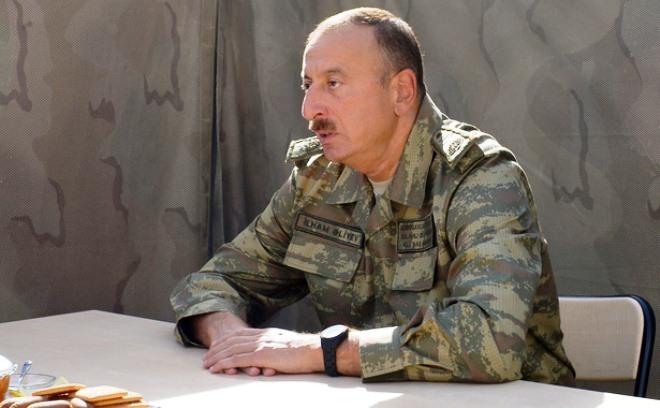 The head of state noted the importance of the Hadrut operation: “They didn’t expect us there, and the Armenian side didn’t expect that we would move in this direction, it was a complete surprise for the enemy. For several days after we took Hadrut, the Armenian side stubbornly insisted that they were controlling it. Although our fighters were already at all the dominating heights in Hadrut, the Armenian leadership had a somewhat shallow understanding of whether the city was taken or not. After we established control over all the main heights around Hadrut, in fact, the fate of this city was already decided. It was just a matter of time when we would physically enter there, again - with minimal losses. And only when we showed on TV how an Azerbaijani serviceman, hoisting a flag over the building of the city administration, reported to me about the capture of Hadrut, the Armenian side no longer had any arguments to continue to write fables.”

President Ilham Aliyev noted that before Hadrut, Jabrayil was liberated - in early October: “It was also important from a symbolic point of view. Since Jabrayil was the first city - before that we liberated villages and settlements. And, of course, an important stage was the liberation of Fuzuli on October 17, 2020, since it is a big city, second only to Aghdam in the Karabakh region in terms of population.”

“The crown of our victory is the Shusha operation. Anyone who comes now to Shusha by the Victory Road can see from where we were going there. It was an incredible mobilization of physical and moral efforts. Very long days in the woods, off-road, with light weapons, tirelessly going forward and then liberating Shusha is an unparalleled feat, true heroism! Of course, the liberation of Shusha broke the back of the enemy, after which the enemy practically surrendered,” the president said.