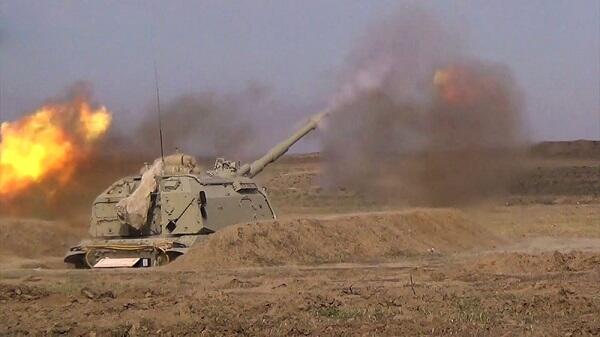 Armenia and Azerbaijan had long been locked in an armed conflict in the latter’s Karabakh (Garabagh) region since the early 1990s when Armenia illegally occupied 20 per cent of Azerbaijan’s internationally recognized territories. On September 27, 2020, the decades-old conflict between the two countries spiralled after Armenia’s forces deployed in the occupied Azerbaijani lands shelled military positions and civilian settlements of Azerbaijan. During the counter-attack operations that lasted 44 days, Azerbaijani forces liberated over 300 settlements, including the cities of Jabrayil, Fuzuli, Zangilan, Gubadli and historic city Shusha, from nearly 30-year-long illegal Armenian occupation.

"The war ended in a tripartite statement signed on November 10 by Armenia, Azerbaijan, and Russia. Under the statement, Armenia also returned the occupied Aghdam, Kalbajar and Lachin districts to Azerbaijan.
In accordance with the decree, September 27 will be marked annually in Azerbaijan as a Day of Remembrance. The day is dedicated to the memory of the martyrs who gave their lives in the Patriotic War. The Azerbaijani Parliament will adopt a declaration on the occasion of the anniversary of the beginning of the Patriotic War. This issue is included in the agenda of the first plenary meeting of the parliament`s autumn session scheduled for September 30, 2021" - the expert states.

He also mentioned that the conflict between Azerbaijan took the whole world by storm due to fierce fighting which could have triggered a regional conflict involving other countries to protect or perpetuate their national and transnational interests:

"In my opinion, this protracted conflict between the two not only signified the importance of territorial sanctity on the part of Azerbaijan but also liberating the Muslims from the clutches of enforced occupation of Armenia. We as a Pakistani nation thoroughly supported our brotherly nation Azerbaijan because of its fair and justified position on the issue of Karabakh and will continue our holistic cooperation in the areas of convergence. This monumental victory of Azerbaijan deserves celebrations by the whole nation as this time around this feat is not only attributed to the martyrdom of the soldiers but also the civilians whose fervour, strength and belief enabled them to regain their territorial integrity. Personally, I was not expecting that the fight will end in 44 days because the complexity of extra-regional power’s convergence and rivalry was narrowing down to this conflict-ridden zone. But, the acumen of war tactics and technology including the dexterity at the diplomatic front by Azerbaijan played a central role in reclaiming the famous city of Susha and the rest of the Armenian-occupied territory. "

Since the conflict is over, Azerbaijan has already started rehabilitation and reconstruction of restored territory from scratch through applying the best urban and rural planning while introducing the concept of “smart city and “smart village”. Only this year, Azerbaijan has allocated around $3 billion from its own budget for the rebuilding and welfare of the liberated territories. One of the main obstacles in developing the liberated territories is the plantation of land mines by Armenia in the past which has caused several deaths and casualties of the civilian population. Even after signing the peace deal on November 10, 2021, Armenia is not providing the maps of planted mines which is a serious concern for Azerbaijan and the International community must force Armenia to provide the maps of planted mines.

Azerbaijan has been extending an olive branch towards Armenia for a delimitation and demarcation of boundaries while maintaining the solidarity and territorial integrity of both and initiates negotiations and dialogue to avoid any further rifts amongst the two countries but to this end, Armenia has not signalled any positive overture. Perhaps, Armenia is still embracing the hackneyed “zero-sum” tactics which will not allow peace to prosper in the region. One of the areas that can serve as the cause of peace and cooperation is transportation projects. In this context, the Zangazur corridor connecting mainland Azerbaijan with its inseparable part the Nakhchivan Autonomous Republic and Turkey will create new opportunities for our region.
Azerbaijan has created a new reality in the Southern Caucasus region which has to be taken into account by all. Armenia has to choose between regional cooperation and illegal and baseless territorial claims against its neighbours. The international community should also play a positive role in this regard and urge Armenia to realise that peace has no alternative. Any acts directly or indirectly supporting revanchism and militarization in Armenia must be ceased."

The expert emphasised the international importance of the consequences of the War as well:

"While looking ahead, it’s time for Azerbaijan to give further impetus to its diplomatic navigation while realising the new realities emerging in the region especially after the US defeat in Afghanistan. New blocs, alliances and economic rejuvenation are in the offing and Azerbaijan has all the potential, capability and opportunity to reap the fruits of collective benefits. The combination and utilization of both soft-hard powers will provide more leverage to Azerbaijan in the region and beyond in the comity of developed nations. It is anticipated that the long-awaited peace, security and stability will prevail in the Southern Caucasus. Azerbaijan is all out to consistently play its part in promoting peace and development in the region and beyond."