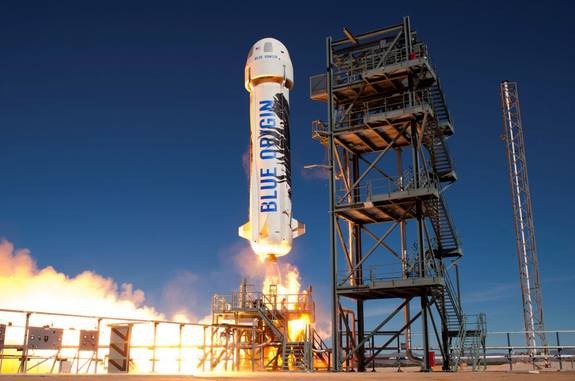 Blue Origin founder and Amazon CEO Jeff Bezos has been outlining the company's plans in more detail, and says he wants the first manned test flights to take place during 2017.

Blue Origin has been running for 16 years and has managed to successfully launch and land its reusable rocket twice. It's had more success in this area than Elon Musk's SpaceX firm, though it's important to note that the two companies are using different types of rockets and aren't actually in direct competition. The next stage will be to add people.

Safety is a much bigger priority than being the first commercial company to get tourists into space, Bezos said, while giving the world's press a tour of Blue Origin's research and development site near Seattle. Around 600 people are based at the site, a former Boeing airplane parts facility.

"You can do the steps quickly, but you can't skip any steps," Bezos told The New York Times.

Bezos also specified 2018 as the year when he hoped Blue Origin space flights for tourists would take off for the first time (assuming all that testing in 2017 goes to plan). He said "thousands" of people had expressed an interest in buying a ticket to leave Earth's orbit, though his company isn't taking bookings yet (unlike Virgin Galactic).

Eventually, Blue Origin plans to make its money back through these ticket sales and by selling its high-tech equipment to other companies.

For now, Bezos says Blue Origin is focusing on refining its rocket technology and getting those first test flights off the ground. He said that eventually as many as 100 suborbital flights could be run every year, launching from a site in West Texas.